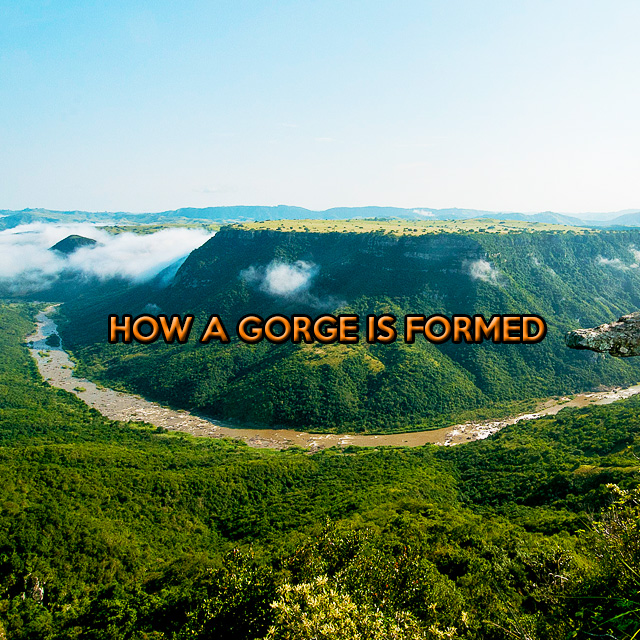 It is a testament to the power of nature and the evolution of the world as to how a Gorge is formed and Oribi Gorge is proof of that.

Wild 5 Adventures is situated on the edge of world renowned Oribi Gorge. People travel from all around the world to come and enjoy the breathtaking views the Gorge has to offer. So next time you in the area come and check it out for yourself and if you feeling brake why not do the Wild Swing into the Gorge while you are at it.

But for now let’s dive into how Gorges are formed.

A gorge is a narrow valley with steep, rocky walls located between hills or mountains. The term comes from the French word gorge, which means throat or neck (we tell our guest it means only for the brave). A gorge is often smaller than a canyon, although both words are used to describe deep, narrow valleys with a stream or river running along their bottom.

A number of natural forces form gorges. The most common is erosion due to streams or rivers. Streams carve through hard layers of rock, breaking down or eroding it. Sediment from the worn-away rock is then carried downstream. Over time, this erosion will form the steep walls of a gorge. The flooding of streams or rivers increases the speed and intensity of this erosion, creating deeper and wider gorges. The deep Talari Gorges in Mali, for instance, were formed by the Sngal River that flows into the Atlantic Ocean on the western coast of Africa.

Erosion and geologic uplift often work together to create gorges. Parts of streams or rivers can be elevated, along with land, during the process of geologic uplift. As rivers or streams flow across this uplifted surface, waterfalls form. Over time, the power of the waterfall erodes the softer rock layers underneath, causing the original river bed to collapse and create a gorge. Macocha Gorge in the Jihomoravsk region of the Czech Republic was probably formed by the collapse of an underground cave that had been eroded by the Punkva River.

The movement and melting of glaciers can also produce gorges. Glaciers cut deep valleys into the Earths surface. These rivers of ice can create huge canyons and sharp, steep gorges. As glaciers melt, or retreat, these gorges and canyons are exposed. The Columbia River Gorge, located in the U.S. states of Washington and Oregon, was partially created by glacial retreat during the last Ice Age.

Engineers have purposely flooded gorges in order to create waterways and dams. These dams generate hydroelectricity, or electricity powered by water. The Three Gorges Dam on the Yangtze River in China is probably the most famous example of such a project. Upstream from the dam, the Qutang, Wu, and Xilang gorges were partially submerged in order to create a waterway. The new waterway would allow freight ships tonavigate from the East China Sea, part of the Pacific Ocean, to the city of Chongqing, about 2,250 kilometers (1,400 miles) inland. The 26 turbines of the Three Gorges Dam generate approximately 18,000 megawatts of electricity for Shanghai and other cities. However, many people worry about the environmental impacts of the dam and criticize the fact that more than a million Chinese families were forced to move from their homes near the gorges in order to complete the construction.

Many geological discoveries have been made at gorges because gorges often expose layers of rock that go back thousands of years. Olduvai Gorge in Tanzania has layers dating as far back as 2 million years. The Olduvai Gorge is famous for the fossils and ancient tools found there by scientists Louis, Mary, and Richard Leakey. These remains of ancient animals and plants provide clues about early humans.

2 thoughts on “How a Gorge is formed”