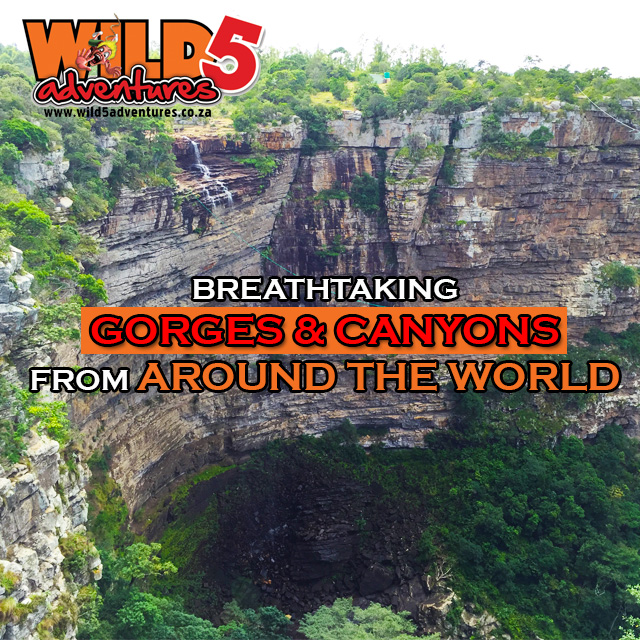 Here are some information on some of the most breath taking Gorges and Canyons from around the world.

As amazing as these Gorges and Canyons are, we still believe that Oribi Gorge is by far the best of the lot, so let’s kick off with Oribi Gorge…

Oribi Gorge is a canyon in southern KwaZulu-Natal, South Africa, just west of Port Shepstone, which itself is 120 km south of Durban. Oribi Gorge, cut by the Mzimkulwana river, is the eastern gorge of two gorges that cut through the Oribi Flats (flat sugarcane farmlands) of KwaZulu-Natal. The western gorge was formed by the Mzimkulu river. The gorge is approximately 400 meters (1,300 ft) deep, and almost 5 kilometers (3.1 mi) wide at its widest.

Erosion by these rivers have carved out nearly 30 kilometres (19 mi) of spectacular kloofs and crags, covered with subtropical vegetation. In the gorge, the dense forest on the sandstone slopes is home to various small mammals, while the large leguaans excavate their burrows along the riverbanks.

Oribi Gorge derives its name from the oribi, a small antelope that lives in the gorges.

If you measure the depth of a canyon by calculating the difference between the highest peaks of the gorge and the height of the river surface, the Kali Gandaki Gorge is the world’s deepest. The Gandaki river the flows through the gorge is older than the Himalayas and has (at its lowest point) an elevation of 1300 meters, creating a difference of 6800 meters (from the highest peak). The gorge is popular among trekkers in Nepal because of the easy access to the river.

Cotahuasi Canyon is considered to be one of the deepest in the Americas. At 3535 meters, it is 335 meters deeper than the Colca Canyon (though less deep than several canyons in the Himalayas). The canyon, in the Peruvian south, is characterized by its steep relief and noted for its isolated nature that has allowed the preservation of the local peoples’ traditional cultural customs.

The Grand Canyon is a gorge carved by the Colorado River and is contained in the Grand Canyon National Park in Arizona, one of the first national parks in the United States. According to scientific research the canyon was created by the Colorado River over a period of six million years. The canyon is 277 miles long and has a maximum depth of 6000 feet, exposing almost two billion years of Earth’s history through its various layers of rock.

Barranca del Cobre, or Copper Canyon, is a group of 6 canyons located in the Sierra Tarahumara, in the southwestern part of Chihuahua, Mexico. The cumulative area of the ‘canyon system’ is larger and several portions of the system are deeper the Grand Canyon. To preserve the culture of the Raramuri people and showcase the beauty of this area, Mexico has established the Parque Nacional Barranca del Cobre, or Copper Canyon National Park.